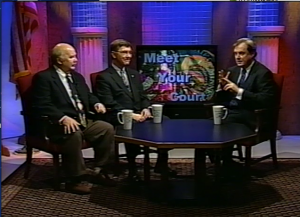 In January 2001, the Hennepin County District Court launched a 30-minute weekly program on the Channel 6 Metro Cable Network. “Meet Your Court” was the inspiration of then Chief District Court Judge Kevin Burke, who felt that the media generally failed to report what was really happening in the court. As it turned out, Burke assumed the role of presenter on the show, routinely interviewing many of the 61 elected officials in Hennepin County and addressing a wide variety of topics such as juvenile, family, property and drug courts. More sensitive topics like race, civil rights and domestic violence were also addressed.

Fast forwarding to the current moment, the Minnesota State Law Library has carefully preserved the master videotapes of each episode of “Meet Your Court”. Out of concern over the inevitable deterioration of the magnetic videotapes, as well as with an eye to having the program available as modern digital video files, Saving Tape was engaged to digitize the video archive to quality Mp4 video files. MN State Law Library Head of Technical Services, Erica Nutzman, was familiar with Saving Tape by virtue of their mutual involvement in the Twin Cities Archive Roundtable. Erica presented Saving Tape with roughly 80 videotapes. In some cases there were multiple episodes on a single VHS tape. Accordingly, Saving Tape was able to divide the programs in post-production so that there would be one digital video file for each episode.

The digital video files were encoded using the H.264 codec, bearing the suffix “Mp4”. This codec is popular for both archival digital storage as well as posting online for access by the public. During the analog to digital conversion process the interlaced video signal is transformed to progressive frame protocol in order to match the progress frame playback engine of modern computer monitors, televisions and mobile devices. Time Base Correction, or TBC, is applied during the analog to digital conversion process to ensure that the de-interlaced video fields are properly aligned. This results in the smoothest, highest quality progressive frame output.